Welcome back, fellow Geeks and Nerds!

This week, I’d like you to say hello to one of my favorite authors (and it helps that he’s also one of my friends).

Please give a warm welcome to T.L. Evans, the author of the esteemed “Strings On A Shadow Puppet”, and book reviewer extraordinaire on his website “The Archaeologist’s Guide to the Galaxy”. 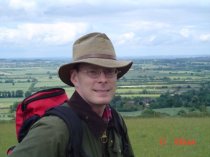 Tom comes from a 25-year background as an actual Archaeologist (and yes, he even has a whip and Fedora). As former Head of Geomatics at Oxford Archaeology, T.L. has studied humanity from a unique point of view. His specialty in Northwestern Europe (or more commonly called The Celts), gave him years of study on humanity in our past. His intelligence and love of Fantasy, Science Fiction, Espionage and Mystery novels, has given him a unique perspective on our present and future.

Without further ado, I give you my interview on where T.L. Evans thinks we have the potential to end up. Sit back and enjoy!

Welcome back to my little corner of the globe, Tom.

Hi Yolanda!  It’s a privilege to be here.

So, Tom, what made you want to become an Archaeologist in the first place?

Oh that’s a LONG story.  My father was a historian, so that didn’t hurt.  Also I spent much of my childhood climbing around the Castles, stone circles, and other ancient monuments throughout North Wales.

In the end, though, I think it was my interest in understanding Humanity.  In my way of thinking, Archaeology is a form of Anthropology.  It is a series of methods and techniques we use to study humans, their culture, and how they interact with each other and the world.  Throw in to that the chance to work outside with a team of like-minded people… and well… it’s hard to ignore.

What were some of the things you uncovered about humanity of the past, which impressed you the most?

Well, if you’re talking about finds, the most fascinating I had a chance to work on was the Ferry-Fryston chariot burial in Yorkshire.  A fully articulated chariot with a man with a ‘warrior’ kit buried on top of it, set in a square barrow whose enclosure was filled with over three hundred cattle.  Pretty cool stuff that told us a huge amount about how Iron Age vehicles were constructed, social status and the longevity of burial sites.

If, however, you’re talking about human nature, well… that is hard.  Humans are remarkable creatures.  We both adapt to environments and adapt our environments to ourselves.  We can be stupid and closed-minded, and simultaneously be ingenious and empathetic.  And it is in the latter that perhaps our greatest strength lies: the ability to adopt other people and cultures into our own set of self… when we overcome the concept of Other and see instead Us.  We can even do that outside of our species… that’s pretty remarkable.

OK, what, then, are some of the things you uncovered about humanity of the past, which appalled you?

Oh… those are too many to list.  Probably what gets me the most is the frequency with which humans can turn exceptionally violent and cruel, even when their society has taboos against it.  Put in a group, with just a little encouragement, perfectly kind men and women can torment and even torture each other… and derive a very sick pleasure from it.

Evolution is a pretty loaded term.  Biologically speaking we have quite the capacity to evolve, and indeed, Modern Humans are a pretty recent and thus far short-lived adaptation of the hominid line.  Evolutionarily speaking?  Who knows how long we will go on?

Interestingly, our sympathy and our ability to adapt the world around us is also leading to the survival of members of our species who would have been removed from the gene-pool through natural selection.  Will this strengthen us or weaken us? Who knows? Probably, both.

Of course, unlike previous hominids, we have actually developed the ability to change our own biological nature. It doesn’t take a science fiction writer to see how genetic and/or cybernetic developments could change the very nature of being human or create the fabled ‘post-human’ state.

Yet speaking socially, rather than evolutionarily, I actually have great hopes for humanity.  I know, I know, my books may not show it, but it’s true.

You see, I know that many people look at the horrors in the news and feel despair.  Genocide, mass shootings, systemized rape, war crimes; I can see why someone would feel we are degenerating as a species.  Yet think about war crimes… the term, war crimes.  There was a time, not that long ago, where the concept of crimes associated with war would have seemed ridiculous.  Genocide is similar – the concept of wiping out every last member of your enemy was long considered a drastic action, but not one that would necessarily be condemned, and indeed in many cases in the past it was ordered by secular or religious powers.

Think of torture.  What is and is not torture may be debated, but anything so defined is illegal and subject to the courts.  Not that long ago the courts were among those using torture.

The same can be said of slavery. There was a time when slavery was almost universal.  Most cultures had some form of slavery.  Now? Slavery may still occur, but it is illegal across the globe.

These things are huge progress.  We have a long. long way to go, and could always back slip, but there has been serious progress over the past thousand years.

What did you take from your previous career and use in “Strings On A Shadow Puppet”? Which, by the way, I’ve read twice already. 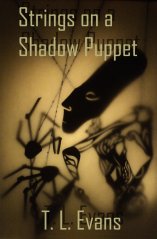 I took a huge amount, and it sort of permeates the book throughout.  The very core questions posed by the book come from my study of anthropology, human nature and the past.

There are things that are more directly the result of my life as an archaeologists, however. In fact, the one set of things I get asked about the most in the books, the Billanobians, are a perfect example.  They represent a sort of anthropological game in one sense.  A hodgepodge of different cultures slammed together in a sci-fi universe.

Then there are the Atrucans, who are part of the present book I’m working on.  They are totally gender divided society, men can have one set of professions, women others, and never the twain shall meet.  Yet, unlike a lot of stories, I didn’t want there to be a lopsided divide of power.  Instead, each gender has power in the society – it’s just that women control some aspects and men others.

Speaking of the first novel in your Sophyan Empire series, what do we have to look forward to in the next book in the series?

Funny you should ask as that sequel is about 2/3rds done at the moment, and coming along very nicely.  It’s working title is “The Traitor’s Gambit” and it’s bit more of a spy novel and less of a classic military story than the first book.  It follows on with some of the surviving crew of the Hunter, but sends them undercover and outside of the boundaries of the Sophyan Empire.  It really builds upon them as characters, while putting them in very dangerous situations.  Also, while some of the mysteries of the series as a whole grow deeper, we do get to see the full motivations of some of the characters that were hinted at in the previous book.

I think people will enjoy it.  Oh, and I should note that like “Strings on a Shadow Puppet” this book does have a beginning middle and end.  You won’t have to have read the first book to enjoy this, and there will be a full sense of completion upon finishing it.  Even so, you will probably enjoy “The Traitor’s Gambit” more if you’ve read the first novel.

Tom, thank you very much for taking time out of your busy day to answer a few questions for my readers. Having the perspective of Humanity as portrayed in science fiction from you is a thrill for me.

As I stated several weeks ago, one lucky commenter from the posts of this series was chosen to win a $25.00 Amazon Gift certificate. And just to show how much fun he had being interviewed, Tom has cheerfully agreed to give away a kindle version of “SOASP”. The winner will need to give an email address which they use to log in to Amazon.

The lucky commenter is:

I would like to thank all of my faithful readers for a great year. It has been my pleasure to share my love of all things science fiction with you.

I will return next year on January 7th with a new series on some of the cheesiest Sci-fi movies that we all love! Until then, please enjoy this Star Trek rendition of “Let It Snow”.

Happy Hanukkah, Merry Christmas and Happy Kwanzaa and Happy New Year to you all!